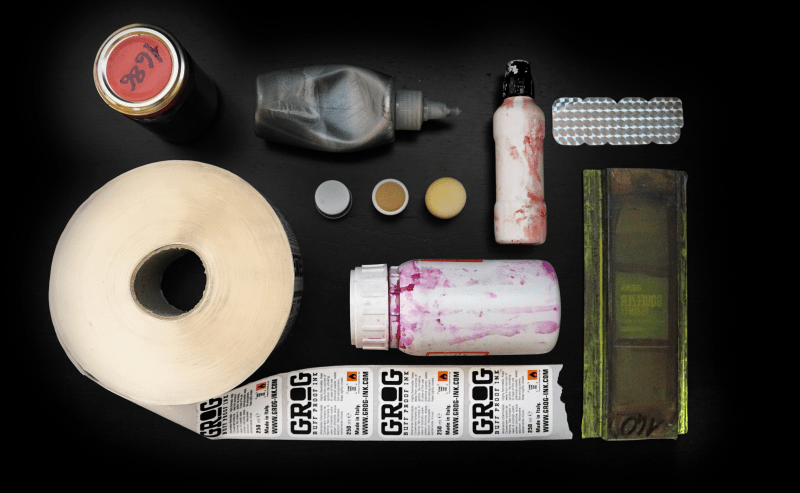 Italy has always been THE country where finding good dyes and additives, due to the leather industry who flourished in the northern area. When we were kids, in the 90’s, the only option for scribbling was a Posca and/or a Pilot racked somewhere, pimped with some leather dyes, so we soon learnt how to “boost” our tools, in order to keep our names in the streets for longer.

In 2005, apart from few poster markers, still nothing special was available for writers.
There were already too many spraycans brands in the graffiti world, but not so many marking tools companies… and especially not so many good markers for heavy tagging routines. That is how Grog was born. We wanted a good deep black ink, like it was the Nero d’Inferno back in the days.

THE LUXURY OF DIRT

If you think about Grog, the first thing that comes in mind it’s the iconic shape of our refill bottles.
We haven’t invented the wheel, we followed the rules of the writers who used to “rack” from other cultures.
The idea of the Hanna & Barbera characters in the Seen wholecars, is the same that we applied to our products: We took the beauty and the luxury aspects of the cosmetic industry and moved it to our products,  made for handstylers, scribblers, writers.

When the company was founded, at first we released the Buff Proof Ink refill bottle and, quite immediately, the Squeezer, the tool who revolutioned the tagging game. Today the cities’ skin is marked by round-shaped dripping handstyles, before it was more of a square straight handstyle.
Sometimes it happens to hear that “we haven’t invented” the Squeezer, because there were people before us, tagging with bingo daubers. Of course this is absolutely true, as it is true that writers were spraypainting the subway car sides before the advent of professional graffiti spray paint brands.
As a company, we have set a standard, the others followed it.